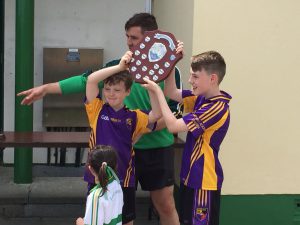 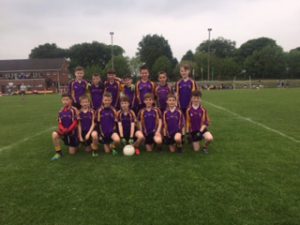 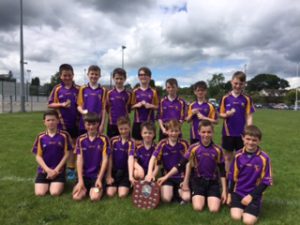 While the East Down U12 Football League continues throughout the summer, the U12 squad will be gaining further experience by competing in a number of tournaments around the county and beyond.
The first of these was the Gary Murray Memorial U12 Tournament held in Clonduff on the 27th May. With games only seven minutes long, there was little margin for error and the team kicked off with fine wins over Longstone and Clonduff. They then drew with a strong Mayobridge side who would ultimately take the cup home with them. The Duff lost their final group game to a physically strong Carrickcruppen side, but nonetheless still qualified for the cup knockout. Here they played Clonduff A, but narrowly lost out after another close encounter.
The team worked hard throughout the day and their performances were very good, particularly in the early part of the competition. Every member of the squad played his part in what was a real team effort.
The coaches were particularly pleased with the movement throughout the team as they sought to transfer ball quickly through the pitch. The squad also showed a willingness to battle hard for each other with a good team spirit.

The following weekend, Saturday 3rd June, the squad were in Liatroim for the Pat Doyle Tournament at Fontenoy Park.
Carryduff were placed in a tough group and had three competitive games. They defeated hosts Liatroim, but lost narrowly to Cumann Pheadair Naofa and an impressive Bryansford team who went on to lift the cup later in the day.
Carryduff qualified for the shield competition and in the semi-final they played Drumgath. This was a thrilling game with the Duff on top for long periods. However, two Drumgath goals in quick succession kept it interesting before Carryduff secured a deserved win on a score line of 3-2 to 2-2. This secured a final with Liatroim and the boys saved their best until last, running out comprehensive winners on a score line of Carryduff 3-5 Liatroim 1-2.
This was the first time that Carryduff had played in the tournament and it was therefore especially pleasing to bring home some silverware. The squad worked well together, with everyone getting plenty of game time. Performances improved as the day went on and the team played some nice football which gained them deserved reward.
There were no weekend league games as attention turned to the Ulster Championship encounters between Down and Armagh in Páirc Esler, Newry. One of the squad members, Niall O’Neill, had the honour of representing St Joseph’s Primary School Carryduff in the exhibition game at half-time in the senior match. There were a good number of other boys from the squad in attendance, many sporting the colours of Carryduff and An Dun. A number of parents, who were not themselves born in the Mourne county, seemed particularly proud to see their kids in the red and black on what was a great day for Down football.