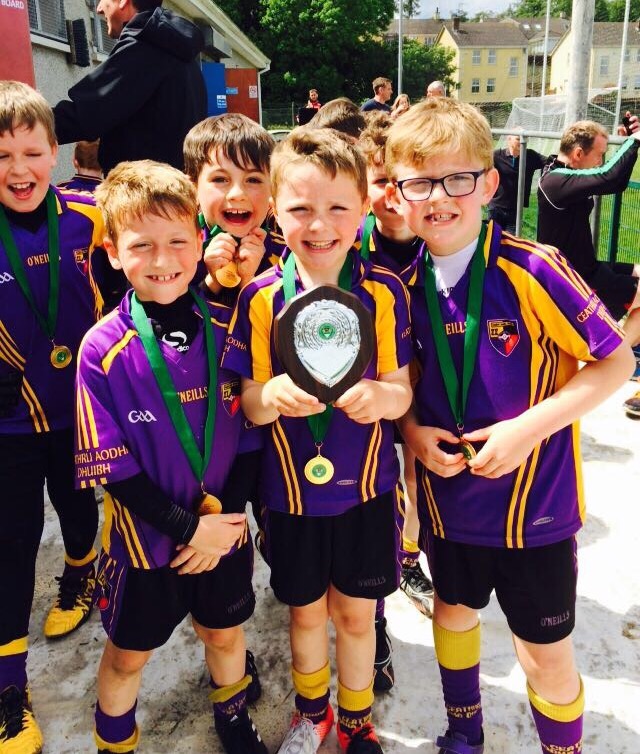 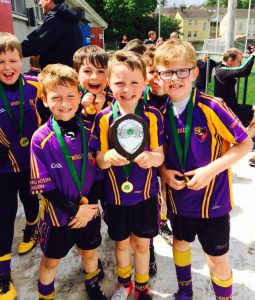 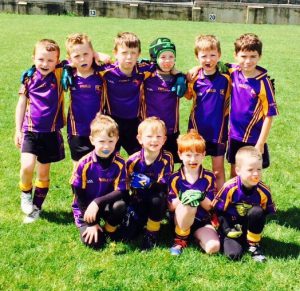 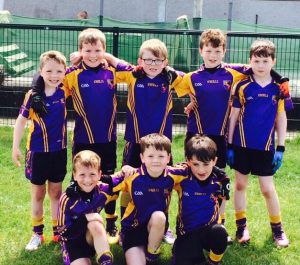 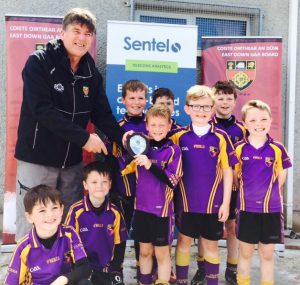 On a damp a windy morning in June, the U8.5 boys of Carryduff headed to St Colman’s Drumaness for the inaugural East Down P3/4 Super Blitz. Fourteen clubs took part with two groups of five teams and two groups of four teams drawn up. We entered three competitive teams which gave an opportunity for all the children to compete. Discipline, at all times during the competition, was the clear and concise message delivered to the players from their coaches and this was fully taken on board by the lads who behaved impeccably throughout the day.

Team A was scheduled to play against Bryansford A, Downpatrick A, Ballykinlar and Drumaness. The boys took to the field working hard from the throw in. They hit two beautifully worked points from the off before Bryansford responded with a timely over the top goal, beating the defence with one pin point pass. The character of these boys was tested but they answered with a might long range point to level the scores. However, all their hard work was undone when Bryansford hit two points of their own before Carryduff responded. The boy’s determination was tested and as they tried to push forward for the equaliser they were undone with a perfectly worked counter attack which resulted in a soul destroying goal for Bryansford before the sound of the final whistle.

The team had a break before they had to play their next game so with a little bit of time they were able to refocus and regroup. This break was the catalyst for what turned out to be a day of great success. Ballykinlar who had heroically taken the place of Dundrum in this group were the first to suffer the backlash of a hurt Carryduff team. Skill, determination and sheer hard work pushed the boys to put in a performance of 7 goals and 3 points. Off the ball running, tackling and shooting saw the boys develop as a perfectly honed engine moving as one and scoring at will.

Downpatrick offered a little more physicality but this only encouraged the Carryduff boys to strike harder and dispatch the challenge with a tally of 4 goals and 2 points.

Smarting from a recent defeat by Drumaness the future men of Carryduff took to the field with this memory. A brace of goals, attacking moves and some free flowing football left a shell shocked Drumaness looking for answers.

While it is fair to say the team relied heavily on the magnificent scoring prowess of Fintan McArdle, Conall Vaugh and Oliver Whyte the team’s ability to snuff out attack after attack and dominate in mid field with Tom Hickson and Michael Boyle was a key factor in their success. The confidence and deft skills from the fullback Joseph Kerr saw opposition attacks flounder time after time. Volunteering as keeper and taking the position with pride saw Rory McConnell star in this roll saving at least two certain goals and peppering passes over the pitch at will.

The initial loss and subsequent 3 wins left the lads clear at the top of Group B.

Semi-final: Darragh Cross provided the opposition for the semi-final having topped Group A. Having established a winning formula during the group stages the starting team lineout was left unchanged. The group stages were played however with the minimum of 7 players so it was decided to draft in an additional player, Senan McQuillan, who didn’t disappoint popping up on the edge of the square to score a goal from a cross field ball. Overall, the lads continued doing the simple things right; supporting each other in attack, ‘finding their men’ from the kick-outs which made it very difficult for the opposition to work the ball into the danger zone. Final score: 4-4 to 0-0.

Final: Teconnaught overcame Dromara in the other cup semi-final and provided what proved to be extremely stiff opposition. The lads were afforded a few minutes rest before the final and this was used to re-hydrate and regroup for the final showdown. Again, the message was clear and simple; keep doing the simple things right and keep working hard for each other and you will give yourself and excellent opportunity to take home the inaugural cup. Scores were much harder come by as expected but our defense stood strong leaving the score tied at 1-a-piece at the long whistle. Tournament rules dictated that in this event the next score would win. The Carryduff lads pressed forward on two occasions, the second gaining a free kick on the left within scoring distance. Fintan McArdle, who epitomised the fantastic work ethic and team effort throughout the day duly stepped up, steadied himself, and put the ball over the bar. Final-final score: 0-2 to 0-1. Sin-é.

A word of thanks to the East Down Board for organising it. To our own club man and vice-chair Ger Connery and Sentel for both sponsoring the event and help run the show on the day – the joy on Gers face when presenting the lads with the cup summed up the mood of the day! J

To each and every player who participated in the tournament. A special mention to our B team who battled hard throughout and made it to the shield final, only to be beaten by a stronger RGU team.

To the coaches who have been there for the lads at every training session and blitz/tournament, a massive thank you to you also.