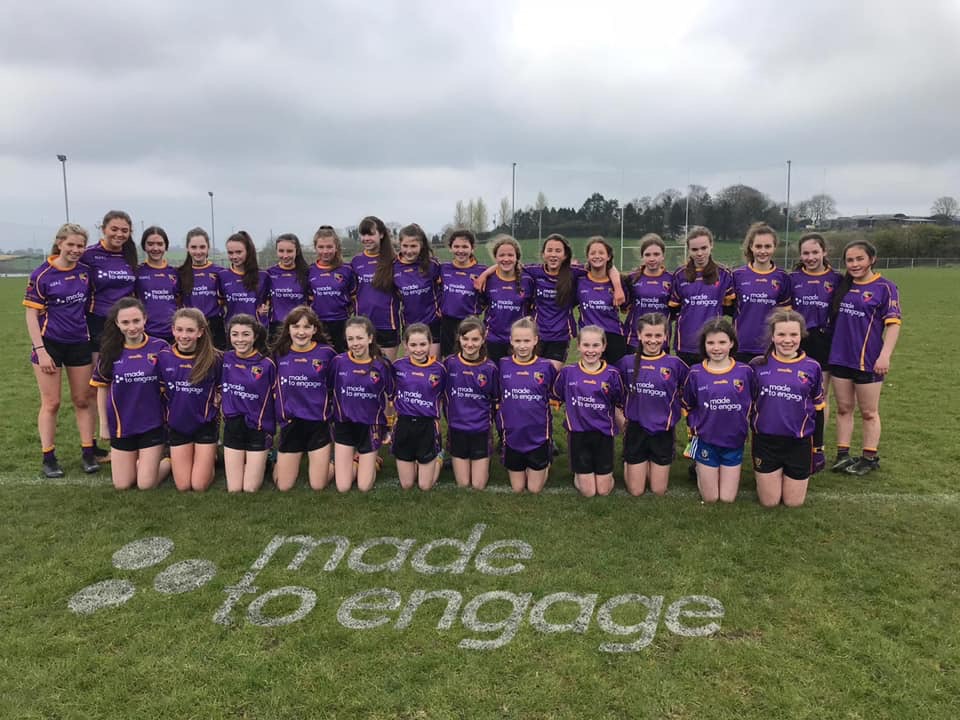 On Saturday 13th April 2019 thirty three girls from Carryduff GAC travelled to Saval CLG to represent the Club in this years Under 14 Co. Down Féile Peile na nÓg2019. It was a bitterly cold morning, with a blustery wind that strengthened throughout the day, but the girls were excited for the matches ahead.

With only three teams in each of the groups, it was effectively a knockout competition, with no opportunity to recover from any below par performance. First up for Carryduff was a formidable Clonduff outfit. Played on the tight confines of pitch 2 this was a battle right from the throw in. After a nervous few minutes from both sides, Carryduff, through captain Sian O’Neill and the excellent Tara McCarron in midfield, gradually gained control making the most of the wind at their backs. A number of excellent points from distance from the elusive Sophie McGonigle gave us a useful lead. At this stage the wing half forwards Orlaith Loughran and Ashling Wojcieszak really came into the game and an excellent cross field ball from the latter was expertly dispatched by Ciara McLornan for a goal, which gave us some breathing space. Still, turning into the breeze, things were far from comfortable.

The work rate in the second half was excellent, with the girls battling for every loose ball and playing some controlled football when in possession. The defensive unit grew in confidence, led superbly by Dara Hughes at full back and Ciara McGeough at centre half back, and when another fine point by Sophie McGonigle gave us a 6 point lead, hopes were for a comfortable victory. To their credit a talented, strong Clonduff side, struck back for a goal of their own and led to a nervous finish to the game.  Crucially, this was to be the last score we conceded, not only in this game, but for the remainder of the tournament. Maebh Napier and Roisin McKenna steadied the ship, with excellent defensive work in the wing back positions and were ably supported by corner backs Olivia Knight and Melissa DeAlmeida, who seemed to relish their defensive duties. Beth Morgan was unlucky with an effort near the end to finish the tie, which finished Carryduff 1-3 Clonduff 1-0.

Next up were Mayobridge, also on pitch 2. The girls approached this game with confidence on the back of the victory against Clonduff and having beaten Mayobridgein the league on the previous Sunday. However, this game proved to be nail biter right to the end. Laura Gilmore got the nod for the full forward position alongside Tara O’Neil and Roisin McKenna was drafted into a more attacking role with Orlaith Loughran slotting in at wing back. The ever improving Orla McCaul deputised in goals for this game. The coaches were aware that the seven minute per half games in the group stages had the potential to cause a few nerves among the players and coaches alike, and so it proved. Playing against the wind in the first half Carryduff dominated possession but couldn’t find that elusive score that would’ve settled the girls down. Laura Gilmore battled hard up front against a resilient defence and saw her goal chance crash of the bar early on. The Bridge remained a threat throughout,playing quickly on the break when the chance arose. A coolly taken point from Sophie McGonigle put us one up just before half time. In the second half, further points were added by Sophie, but it was only when the 4th went over with only a few minutes to play that the Mayobridgethreat resided. Final score Carryduff 0-4 Mayobridge 0-0.

The semi-final draw pitted us against a talented Burren team. This was played on the wider expanse of pitch 1 and although the breeze continued to strengthen,the sun finally appeared, at least in glimpses. This was a much improved performance. Playing against the breeze in the first half, Sian O’Neill and Tara McCarron largely controlled midfield and with Sophie McGonigle driving at the heart of the Burren defence right from the off, Carryduff seized control. Erin Fitzsimons won some great ball at full forward and brought her corner forwards into the game. Lara Deegan grasped her opportunity in a starting role to finish confidently to the net twice in quicksuccession and a quick brace of points from Erin and Sophie stretched our lead further. In the second half, the defence and superb goalkeeping from Tara O’Neill kept Burren chances to a minimum and as Roisin McKenna, who had a great battle against a fine Burren opponent, began to get on top, Carryduff were able to add a further goal through the prolific Sophie McGonigle, aided by impact substitutes Ciara Irvine, Orla McCaul, Laura Gilmore and Marie Therese Norris and a further quality point from Erin Fitzsimmons. Final Score Carryduff 3-3. Burren 0-0. Carryduff had final to look forward to.

The hosts Saval emerged victors from a group containing Castlewellan and RGU Downpatrick and, after defeating Bredagh in the other semi-final, they were to be our opposition in the final. After winning the toss,Carryduff played with the wind in the first half with the hope of opening up a decent lead by half time, but this wasn’t to be the case. This was a closely contested encounter with tough individual battles occurring across the field. Gradually, after some initial broken play,Carryduff began to assert themselves on the game. Through Ciara McGeough, who made some vital interceptions and read the game superbly and Maebh Napier, who barely put a foot wrong, we started to press.  Tara McCarron and Sian O’Neil again worked tirelessly in midfield and Sophie McGonigle provided another point. However, our attacking efforts were met with stoutdefence and at half time we only had a one point lead. Would this be enough against the wind in the second half? The girls saved some of their best football for the end. Under pressure early on in the second half the girls weathered the storm through brave defending by the ever reliable Dara Hughes aided by Melissa and Olivia on either side. Keeper Tara O’Neil was cool under pressure collecting some high balls and driving out of defence with authority. After a couple of Saval efforts flashed wide across the goals Carryduff began to control the game. Sian O’Neil continued to drive forward, imposingherself on the game, and after a strong carry beyond the 20 metre line she pounced on a loose ball, coolly slotting it into the back of the net. Our half forwards Ashling and Orlaith were a constant outlet for the team aided by ferocious work rate from Lara Deegan. Another well taken score by Sophie McGonigle resulted in a final score of Carryduff 1.2 – Saval 0.0. Carryduff were County Down Féile champions 2019.

The coaches are proud of the efforts of all the girls,but particularly so for those girls who travelled, ready to help their team but who didn’t get the opportunity to play. In particular we would like the girls who travelled, knowing that they couldn’t participate due to injury, but who wanted to support their team mates. Well done all.We would also like to thank all the support from parents throughout the day. Finally, we would also sincerely like to thank our hosts Saval GAC and all on the organising committee who made this event happen. We look forward to participating in the National Féile Peile nanÓg competition in Connacht in June.