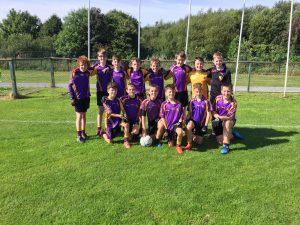 With the East Down U12 leagues having reached a conclusion, the squad have nonetheless continued with training and had teams represent the club in a series of tournaments.  Our own tournament weekend was a huge success with, for the first time, U12, 10.5 and 8.5 competitions played out over two days. There is so much organisation that goes in to such a weekend, much of it behind the scenes and out of sight, so a very big well done is due to everyone who helped in any way. The number of teams from all over the country who participated is testimony to the popularity of the tournaments and the Carryduff boys performed well at all levels, claiming a number of notable scalps along the way. On Saturday past, Carryduff sent an U12 squad to the RGU Downpatrick tournament and again the boys did well. It’s the nature of underage tournaments that with counties organising their underage football along different age bands, our boys are often pitched against older teams on these occasions. This was certainly the case in Downpatrick, but the Duff boys embraced the challenge manfully and no one took a backward step against physically imposing opponents.  In their group stage, the Duff secured a comprehensive victory over Ballyholland as well as a draw against Armagh Harps, a game the Duff would surely have won but for some wasteful shooting in front of goal. That Carryduff were defeated by Pearse Ogs (a great tussle that the Armagh side edged by 2 points) and Clann Eireann was put in to context when these sides later contested the Cup final, the Ogs ultimately emerging victorious.   The Duff finished third in their most competitive of groups and met a second Armagh Harps team in the Shield semi-final. This was another titanic battle which could have gone either way. The Harps edged it by a point, with the last kick of the game, but great credit to Carryduff for another excellent display. The U12s have one remaining tournament in Maghera at the end of the month and in the meantime the squad have split to compete in the new U11 and U13 East Down leagues. The younger boys have already played their first game and secured an overwhelming victory against RGU on Saturday. The U13 league will commence in October and hopefully tournaments like Saturday past will provide useful preparation for those boys who are making the step up.