The Carryduff U12 boys had their final games before the holiday break and after a couple of good performances, the squad secured two impressive victories.

In Division One, the boys made the trip to Downpatrick on Friday evening. On their last visit to RGU, Carryduff had secured a wide margin victory and their hosts were determined to provide a much more competitive test for the Duff boys on this occasion. The first half saw RGU with the wind at their backs and they started brightly, hitting the first couple of points from distance. RGU were getting plenty of men behind the ball, while counter attacking at speed and Carryduff took a while to come to terms with their opponents shape. The half ended all square, 1-4 each, with the Duff lads knowing they were in a game.

The second half saw Carryduff with more possession but they struggled to break through a packed home defence. RGU were tackling hard and closing down space and Carryduff were having to work hard for every score. As the game neared the final ten minutes, Carryduff led by a point but were struggling to put the game to bed. And when RGU broke away for a goal, to retake the lead, the gauntlet was well and truly thrown down to the boys.

Thankfully they responded superbly, going down the other end for a goal of their own to retake the lead before hitting a further 1-2 without reply to ease to victory. This was a great test for the boys and one they came through with flying colours. Credit to RGU who, backed by a vocal home support, really put it up to the Duff with both sides going at it hammer and tongs. A proper test and a good result in the circumstances. Final score RGU Downpatrick 3-5 Carryduff 4-8.

On Sunday morning, Carryduff travelled to Drumaness for a Division Two game against St Colman’s. Carryduff brought a large squad and all the boys got plenty of game time. Carryduff were slow to start and the first half saw Drumaness play the better football and they led at the break by 1-7 to 1-3.

Carryduff coach James McKernan made some tweaks to his formation at the break and with the instructions from their coach still ringing in their ears, the Duff were a different proposition in the second half. The boys started to pass the ball much better and moved at pace through their opponents. A four goal blitz in eight minutes changed the whole complexion of the game and with their defence now well on top of their opponents, Carryduff emerged victorious on a scoreline of St Colman’s Drumaness 2-8 Carryduff 6-8.

There are no league games until 23rd July, but training will continue for the squad with full details of times and venue on teamer. 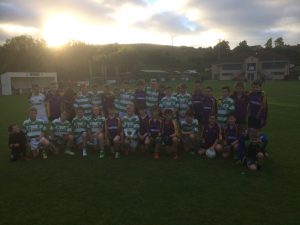